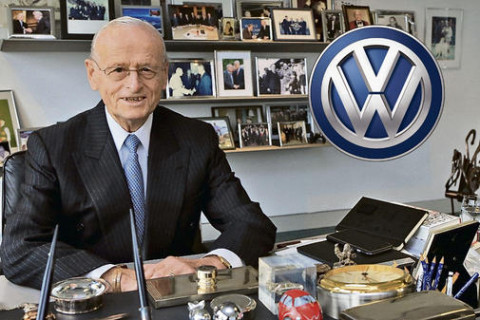 Carl Horst Hahn (born 1 July 1926) is chairman emeritus of the Volkswagen Group. He served as the Chairman of the Board of Management of the group’s parent company, Volkswagen AG (formerly Volkswagenwerk AG) from 1982 to 1993.

During his tenure as chairman, he expanded the group’s car production from two million units in 1982 to 3.5 million a decade later.

Hahn was born in the German state of Saxony and raised near Chemnitz. His father had been a senior manager of DKW and Auto Union, which later evolved into the Audi car brand. As a college student in Europe, he studied business administration at the University of Cologne and the University of Zurich; he also studied economics and politics in Great Britain and France.

Hahn got his doctorate in Economics at the University of Berne in Switzerland. Before joining Volkswagen, he first worked as an economist in Paris.

Hahn joined VW in 1953 as an assistant of chairman Heinrich Nordhoff, and he quickly became head of sales promotion in VW’s export department. Hahn was a favorite of Nordhoff’s, and the chairman made him president of the company’s U.S. subsidiary, Volkswagen of America, in 1959.

Though Hahn was applauded for making the Volkswagen Golf the most popular car in Europe, and expanding the company through the SEAT and Škoda acquisitions, Volkswagen was in financial trouble by the end of his tenure as chairman, having lost 770 million marks in the eighties surge of the European car market, maintaining a low after-tax profit margin of 2.8 percent.

Pre-tax profits went from three billion marks in 1989 to 1.785 billion marks just three years later. The problem was simple enough; Hahn could not keep manufacturing and development costs under control. The Volkswagen board decided that Hahn had been at the helm of Volkswagen too long, and replaced him with Piech.